Directions for the Tour

1. FROM THE HERITAGE CENTER PARKING LOT, MAKE A RIGHT ON HIGH ST., THEN MAKE THE FIRST RIGHT ON TO BOWMAN RD.

215 Bowman Road (Cromer-Trumbo House)
The Cromer-Trumbo House and Property now houses the Harrisonburg Rockingham Historical Society/Heritage Center Built about 1840 of brick, this is one of a cluster of early brick houses built at the north end of town. The rear ell has a log core which predates the brick portion. The small house in front served as a shoe repair shop for many years.
Across the meadow is the Daniel Harrison House, a 1749 stone structure open as a house museum. This strongly built house served as a place of refuge for residents of the area fleeing from the marauding Indians during the 1750’s and 1760’s. It is a national and Virginia registered historic landmark.

377 College Street (Boyers House)
This mid-19th century structure is one of the few surviving log houses in Dayton and certainly is the best preserved. It is probably typical of domestic building in Dayton at this time.

The “Bird Cage House” was built by a Shenandoah College president in 1902. This picturesque cottage design is one of the finest examples of the Queen Anne style in Dayton. This house has a wrap-around porch, gingerbread trim, gables, and metal spires.

Currently serving as an apartment building, this 1930 Colonial Revival structure was built to serve as the College’s administration building.

5. 340 College Street (pictured to the right)
Across the street is Howe Memorial Hall, the oldest building constructed by the college in 1899-1901. It is an excellent example of the Italianate-Gothic style used for many turn-of-the-century collegiate buildings. The construction includes heavy dark, castle like cornerstone and slit windows. 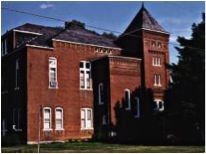 The Kieffer Memorial Gymnasium and Auditorium of 1930 was also constructed in the Colonial Revival Style. The construction includes dark brick and stucco cornice.

These two Victorian homes built by Shenandoah College faculty in 1904 and 1898 respectively are very stylish structures built at the height of Dayton’s fame as a musical center. Professor Hall was also involved with the Ruebush Kieffer Company for many years, and James Ruebush served as a head of the Music Department and late as a president of the Shenandoah College. Take special note on house 315 of the stained glass windows, border, star pattern, the rail on roof ridges, and the stone window sills.

8. CONTINUE DOWN COLLEGE ST. TO MILL ST. MAKE A LEFT ONTO MILL ST., FOLLOWING IT TO MAIN ST.

(Business Rt. 42 on the map). Corner of Mill Street and Main Street (Cannon and Markers)
On this corner sits a World War I German artillery piece and memorial placards. The cannon was the largest field piece brought back from Europe by the United States Government after WWI. The cannon was given to Dayton in honor of it being the smallest town that sent a complete regimental band to Europe during the war. It was restored in 1990 and a marker was dedicated to area veterans of all wars.
On the memorial is one of the few markers in the South dedicated to a Union Army officer, Lt. Col. Thomas R. Wildes of the 116th Ohio. In 1864, one of Sheridan’s engineers was killed by a Confederate scout. As a reprisal, Sheridan ordered the burning of the town of Dayton. While citizens moved their household goods from their homes into the fields, Wildes sent a messenger to Sheridan pleading their cause. Just before the homes were torched, the countermanding order arrived.

229 Main Street (Shepherd of the Valley Lutheran Church)
Formerly the Dayton United Brethren Church, this 1904 Gothic Revival Church is a major landmark on Dayton’s commercial triangle. It was built after a 1903 fire burned the original church. Like many buildings in this area, the Eustler Brothers of Grottoes were the contractors and the brick was made and laid by the Shrum Brothers of Dayton. The church has a fine example of a four manual Moller Pipe Organ, from circa 1928.

On your left, next to the Post Office, is one of Dayton’s finest examples of a late 19th century commercial building. It has a frame structure with a high fake front and elaborate cornice. This 1888 store retains its original porch.

The triangle houses lining the east side of Main Street are Dayton’s early brick structures dating to the mid-19th century. They survived the early 20th century fires that destroyed much in the center area of Dayton.

This is the oldest house on the south end of Main Street, perhaps dating as early as 1820. It was initially part of the Coffman farm. In the early 20th century, the house was owned and enlarged by the Shrum family who operated a brickyard on adjoining lots. It is the only early 19th century Dayton house with a full basement containing a kitchen.

This 1906 house is an excellent and large example of the Queen-Anne -inspired style in Dayton. Among the fine details are the stained glass windows. Johnson Burtner was the builder of this house.

Dating to the 1860’s this brick structure with a richly decorated porch was owned by Aldine Kieffer, one of the founders of Ruebush-Kieffer Company, and probably the best known for the local group of song writers.

This is one of the largest and most stylish Victorian houses dating to the 1870’s in Dayton. A prominent local businessman G. W. Hedrick owned a prosperous buggy factory in Dayton.

A large well-lighted structure, it was built a year after the 1911 town fire. It is an excellent example of early 20th Century factory architecture.

17. FOLLOW THE LEFT FORK OF THE TRIANGLE ONTO COLLEGE ST.

The second of Ruebush-Kieffer Co.’s printing offices in Dayton, this building has been altered very little since its construction and still houses a printing firm. The Ruebush Kieffer Company was one of the largest and most successful music printing houses in the south specializing in the preservation of the character-note form of musical instruction.

Along this street one can see typical early 20th Century Dayton homes. The first, 265 East View, was built about 1891 by the developer of this area, George W. Hedrick, for his own use. (He was also responsible for 201 Main Street– see above.) The second, 275 East View Street, the Staugger House, dates to about 1910.

19. PROCEED TO THE BID OF EASTVIEW ST. TO MILL ST. MAKE A RIGHT ONTO MILL ST.

Now the Dayton Learning Center, the elementary and high schools were located there from 1914-1956. It remained and elementary school until 1989.
Charles M. Robinson of Richmond was the architect of this building. He is responsible for a number of schools in Harrisonburg and Rockingham County, including the initial plans for what is now James Madison University. This Colonial Revival structure used the Corinthian order with a very fine cornice. It was one of the earliest of the brick consolidated schools in Rockingham County. The exterior has been restored.

20. CONTINUE DOWN MILL ST. TO THE HIGH ST. INTERSECTION

Johnson Burtner was the builder of this 1889 home. The corner lot shows to advantage his elaborate gable screens with arched sawn trim and wooden finials.

This 1895 Victorian home was the work of the local contractor, Johnson Burtner, and displays very fine woodwork on the elaborate front porch and gable decoration.

With its bay windows and a turret-style porch, this is one of the most stylish houses in Dayton. A large Palladian window pierces the front and a variation of this Palladian motif with leaded diamond panes embellishes the south side.

Built around 1902 with Gothic revival detailing, this church has some very fine stained glass windows.

PROCEED DOWN HIGH ST. TO RETURN TO THE HERITAGE CENTER.